If data received from the tracker meets all the theft detecting criteria, the Fuel Thefts table will contain records about it, even if there was no actual theft. Such fuel thefts are called false.

To correctly configure fuel theft detection, you need to know not only the technical features of Wialon algorithms but also the operating principles of hardware (trackers, sensors, and the unit's fuel system). This article provides simple instructions, following which you can eliminate false fuel thefts by focusing on the fuel level chart only.

Chart behavior in the location of false fuel theft

Choose one of the options below according to what you see on the chart where the fuel theft marker is located.

1. Jumps during motion or engine operation 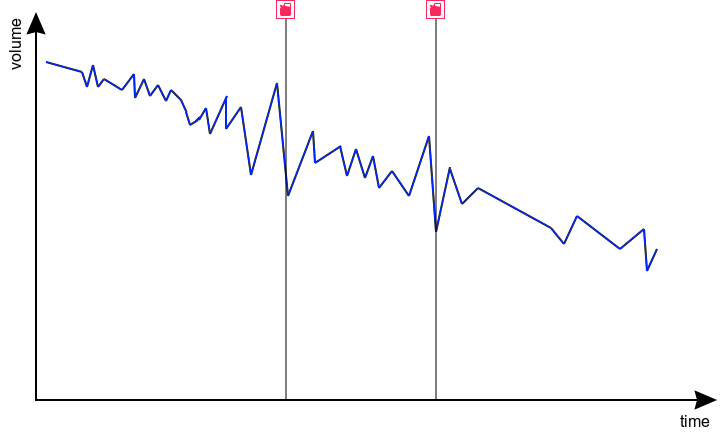 During engine operation, driving on uneven surfaces or basically any movement, fuel fluctuations occur, and the FLS reads them. Depending on the tank volume and shape, as well as the FLS location, these fluctuations can reach dozens of liters, which can result in detected fuel thefts. In general, you can compensate them with the help of a smoothing algorithm adjustable via the filtration level.

Wialon uses median filtering. For each message, several messages before and after it are taken; altogether, they form a filter window, and then, taking these messages into account, a smoothed value in the center of the window is calculated.

The filtration level is set to 3. The window width will be 5×3 = 15. Consequently, 7 messages are taken before the message concerned and 7 messages after to smooth the fuel level values.

For example, messages 54 through 68 will be used to calculate the value in message 61.

2. A sharp jump immediately after the start or stop of motion 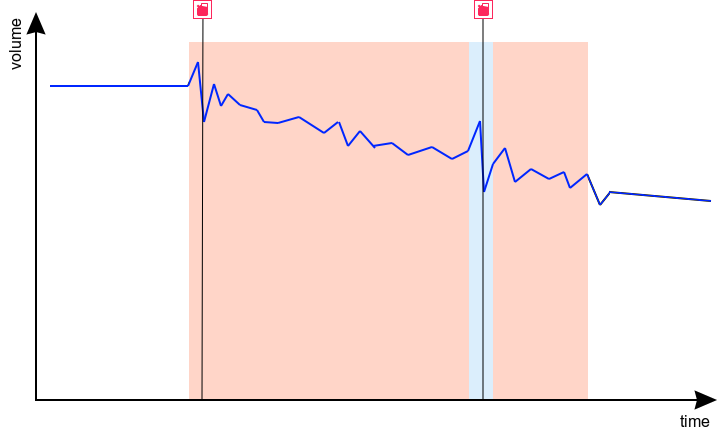 FLS readings can change abruptly at the moment of motion start/stop, which can result in fuel theft detection. If the chosen filtration level doesn't smooth out these jumps, and you don't want to increase it (for example, in your case, this causes significant distortion of input data at other intervals), then you can use one of the two time filters in the fuel level sensor settings:

3. Smooth falling with the running engine and no movement 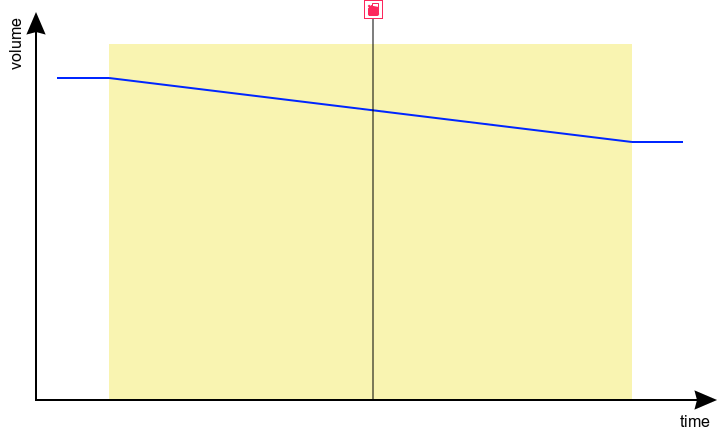 4. Fuel theft during driving, although the chart looks normal 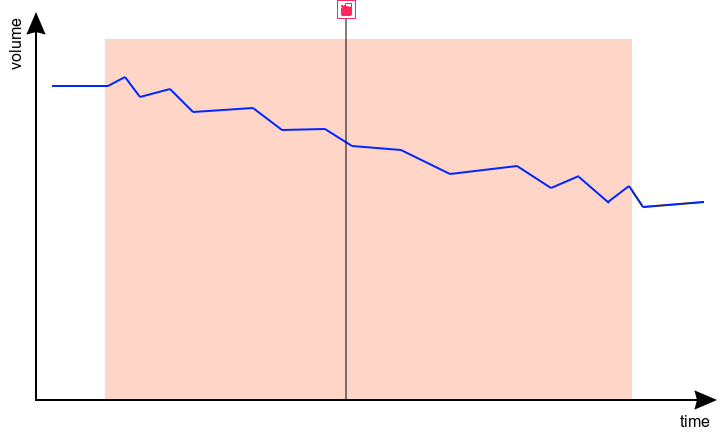 Most likely, you are using the time-based fuel analysis algorithm, and you've also activated the Detect fuel theft in motion option in the fuel level sensor settings. In this case, the FLS fuel consumption value is compared with the mathematically calculated consumption. If the consumption by calculation is set incorrectly, a false fuel theft can be detected when the unit is just making a trip; therefore, it's recommended to check the mathematical model of the calculated consumption. It's set via:

A basic mathematical consumption model can be created using the Math consumption wizard on the Sensors tab in the unit properties. Further, you can complement it, taking into account other factors affecting the consumption (cargo weight, temperature, operation of vehicle attachments, and so on).

5. Significant jumps to the minimum/maximum 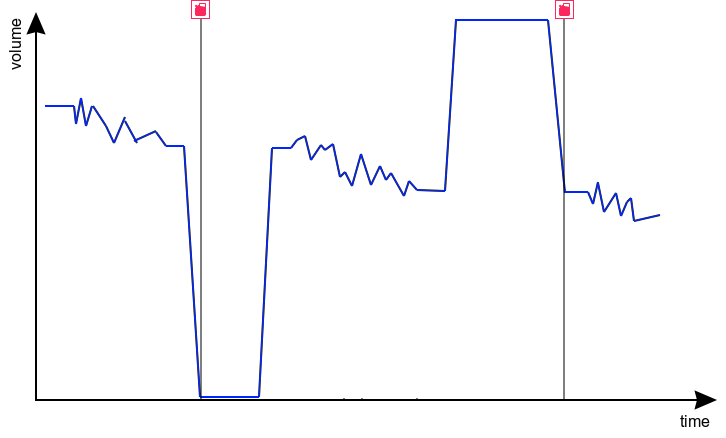 If the chart shows jumps of the Processed fuel level line to 0 or to the maximum value (often 2¹⁶-1 = 65535) and back to the actual value, then even after applying the smoothing, these jumps can cause the detection of false thefts. Such jumps in readings can be connected with the wrong configuration or the connection of the fuel level sensor itself.

It's recommended to fix this problem on the hardware side; however, on the Wialon side, you can try to cut off these readings using the Calculation table. To do this, go to the FLS settings, go to the Calculation table tab, and set the values of the Lower bound and/or the Upper bound corresponding to an empty and full tank. In the lower bound, however, it's better to set not 0 but a value close to zero (for example, 0.1) to cut off false jumps in readings to 0.

6. Significant jumps not to the minimum/maximum 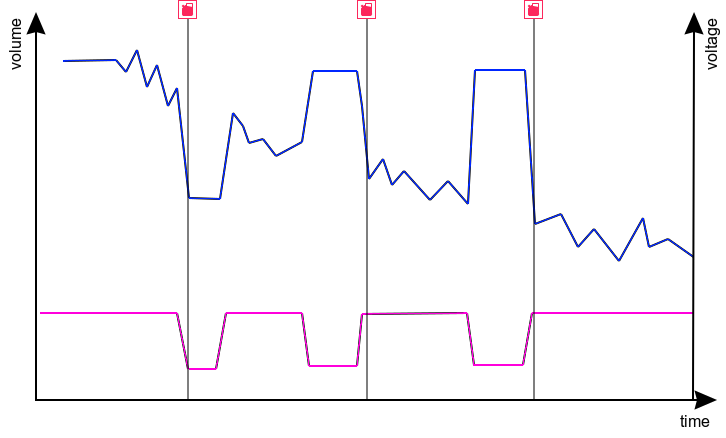 If the FLS readings change by significant values (but not to 0 or the maximum value) and then return to the actual value, even after applying the smoothing, these jumps can cause the detection of false thefts. Such behavior can be connected with voltage surges, which can be seen on the chart using the Voltage line if you have a Voltage sensor.

It's recommended to fix such situations on the hardware side; however, on the Wialon side, you can try to neutralize the impact via Validation. To do this, follow the instructions:

In the example above, a real case is considered since low voltage actually often leads to the distortion of readings of different sensors. This means there is a direct connection between the transmitted parameters of voltage and fuel level. However, you can also use a correlation if you notice a simultaneous change in the FLS readings and any other parameter. Perhaps the tracker doesn't send a voltage value, but it does send a temperature value, and the temperature sensor also fails and sends, for example, 451 °F at the moment of a power surge. In this case, using validation, try to connect the FLS and the temperature value, which should also correct the situation.

7. Smooth falling after filling when there are several interconnected tanks with an FLS in each 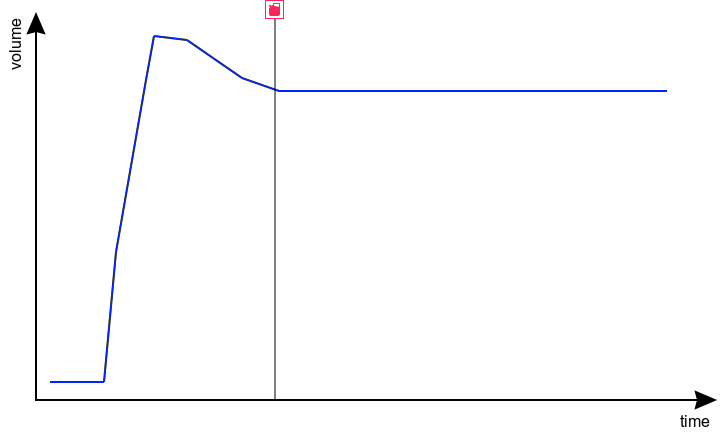 Such a change in the FLS readings may be because the unit has several interconnected tanks and fuel flows between them. After filling one of the tanks, the equalization of levels between several tanks may take some time. If you created fuel level sensors in Wialon separately, the system can detect false theft in one of the tanks immediately after filling.

When working with several interconnected tanks, we recommend you to create a Custom sensor for each FLS (for example, named “FLS 1” and “FLS 2”) and add your calibration table into them. After that, create a separate sensor with the Fuel level sensor type, don't add the calibration table into it, but instead just use the following formula: [FLS 1]+[FLS 2] 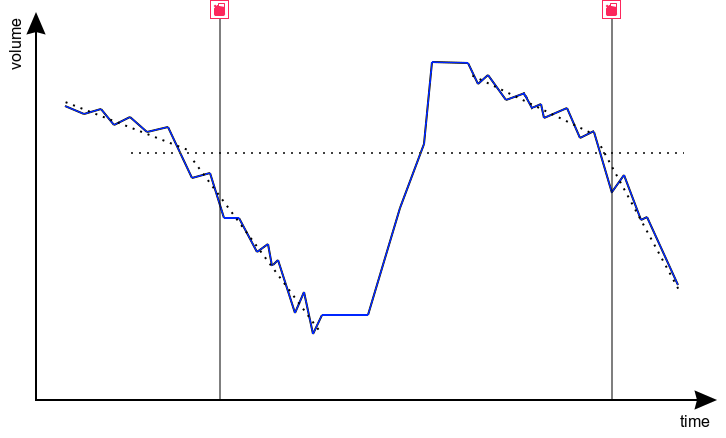 This situation can be observed for tanks of a specific shape at the moment of transition from a wide part to a narrow one (for example, L-shaped tanks). This is particularly likely if the calibration was performed using too few points, and often it's done using only two points (for an empty and full tank). Therefore, it makes sense to re-calibrate the tank using small portions.

9. Smooth change at the same time 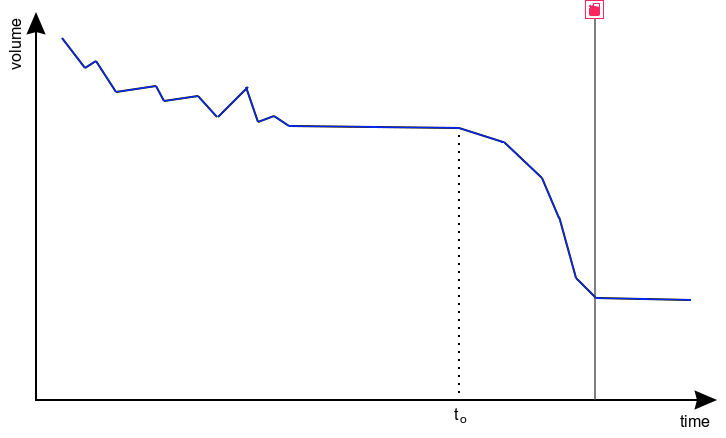 Sometimes the fuel level drops/rises at specific points in time, and in some cases, later even returns to the actual value. This can happen at night, or during a trip (especially when loaded), or after approximately equal time after the end of the trip — it's difficult to identify a common rule.

The solution in most cases is related to the hardware: using a fuel tank cap with a valve to equalize pressure, dirt/sediment removal in the tank or on the FLS. However, if the situation is related only to temperature changes, then using a sensor with the Temperature coefficient type can help you (you can find an example of its setting in the documentation).

None of the variants work

This article discusses only false fuel thefts, so if you couldn't get rid of thefts using the suggested instructions, this may mean one of three variants: