A tachograph is a device that monitors compliance with the drivers' working hours (DWH) of drivers, as well as the speed of the vehicle, the distance it has traveled and the country of location. The use of such a device allows minimizing the risk of accidents due to driver fatigue and optimizing the fleet operation. The need to install a tachograph is determined by law.

This article will cover general issues related to tachography, as well as the options for calculating and displaying DWH that are implemented in Wialon.

Generally speaking, the tachograph is a mandatory device for vehicles engaged in cargo-and-passenger transportation. However, different countries have different rules about the need to install tachographs and the DWH control.

Wialon only supports the European Agreement Concerning the Work of Crews of Vehicles Engaged in International Road Transportation, or AETR for short (from the French Accord Européen sur les Transports Routiers). This is a single agreement on the work of vehicle crews on the territory of European countries.

Rules of other countries

The rules listed below are not supported in Wialon, but it may be useful to know about them:

Each tachograph is configured to control the rules of a specific country/region. The readings of a digital tachograph are legally recognized data in court proceedings or traffic control on the roads, and a document issued by a digital tachograph is the basis for imposing penalties by law enforcement agencies, because this document is generated automatically, protected from falsification and recognized as being objective.

The tachograph information displayed in Wialon has no legal force, despite the fact that it may be based on data received from the tachograph.

Instead of text notation, tachographs use standard symbols (pictograms) so that anyone, even without knowing the language, can understand the tachograph readings. The basic pictograms indicate the modes, i.e., the different driver activity:

The use of the modes may differ from the above description (for example, depending on the requirements for loading or the recommendations of the transport company). And the logic of automatic/manual mode switching may depend on the tachograph model.

Other pictograms are not used in Wialon, so they are not mentioned in this article. However, the driver must know them in order to properly interact with the device.

To get an idea of what criteria the tachograph uses when controlling DWH, you can look at some AETR rules:

DWH control uses a lot of such rules with confusing conditions, and almost all of them focus on the duration of continuous driving, periodic breaks and daily/weekly rest, or their combinations. The tachograph automatically controls the rules, however, the driver must know them in order to correctly plan their route and not violate DWH.

The structure of tachographs

Usually, tachographs are divided into analog and digital.

Digital tachographs are of rectangular shape and installed in the socket of the car radio (head unit). The technical implementation of a digital tachograph is an encrypted system of permanent energy-independent data storage with limited access to data and a thermal printer for reporting. Further, in the article, we will talk only about this type of tachographs.

The main practical difference between analog and digital tachographs is the degree of data protection from hacking. This necessity arises because some drivers try to manipulate tachograph data to complete routes faster while neglecting rest and safety, or to artificially increase their mileage and steal fuel. Any mechanical interference or incorrect data entry will be registered in the digital tachograph's memory, which will be discovered during the official check. Identified manipulations with the tachograph entail a fine, which will depend on the seriousness of the violation and on the country where it’s discovered.

Access to the tachograph memory is provided by 4 types of plastic key cards:

Wialon can display only data from the driver card. It’s possible to work with the DDD format and other formats with similar structure (for example, TGD, V1B, C1B).

The previous paragraphs are a kind of introduction to the tachography and DWH control. Now, let's move on to the direct work within Wialon.

Tachographs are not connected to Wialon directly — they always work via the tracker. Note that some models of trackers have a built-in tachograph, i.e., one body contains two devices at once.

Since the tachograph-tracker-Wialon combination is involved in obtaining information, it is not always possible to solve potential issues on the Wialon side.

In Wialon, not only the tachograph can be the source of information on DWH. The following diagram will help you understand presented in the system sources and options for displaying DWH information. 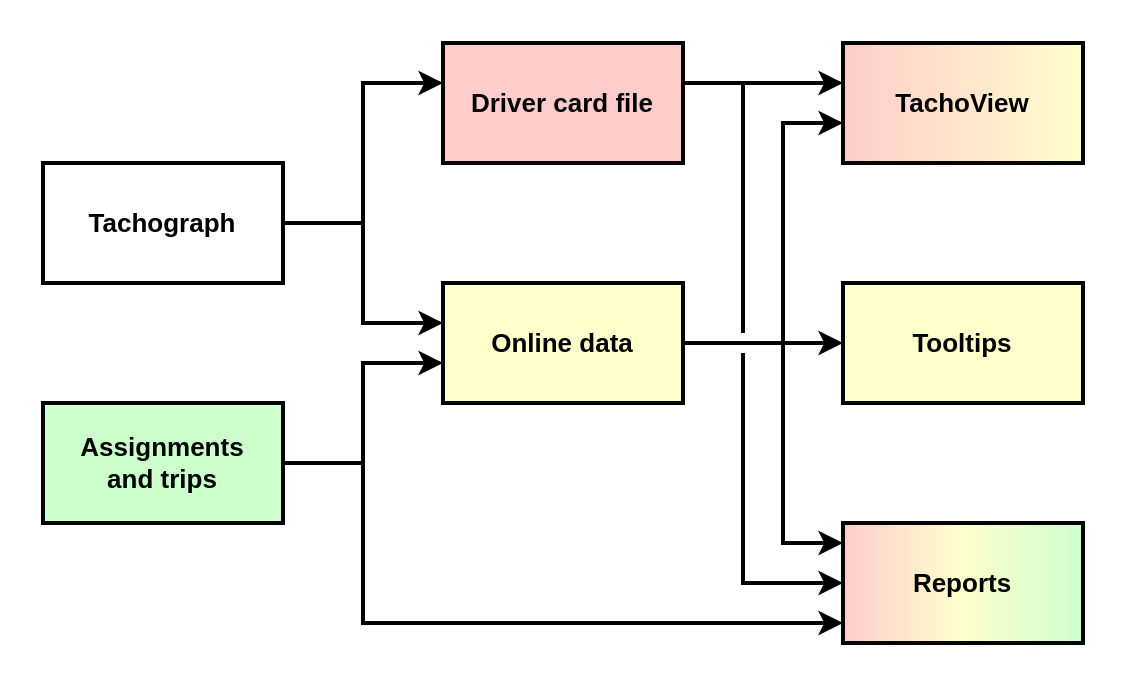 The information on DWH displayed in Wialon can be obtained from several sources.

Files with different data are stored in the tachograph memory. The information on DWH of a particular driver is stored on his card. There are different ways to upload a file from a driver card to Wialon, depending on the tracker model:

As a result of each of the actions described above, Wialon will have a file from the driver card, which will be associated with the Driver element.

A file from the driver card is the only reliable source for displaying tachograph information in Wialon. The controller sees data from the same source when checking the tachograph readings on the road.

The tachograph determines the work mode by the speed of the vehicle, the ignition status and the presence of a card in the slot. Wialon contains this data without the tachograph as well: trips that can be calculated based on the ignition sensor and speed, and assigning/separating drivers. Therefore, driver activity can be determined by messages from the tracker, even if the tachograph is not installed on the unit.

Assignments and trips can only be used as a rough estimate of the DWH compliance. Unlike the tachograph, which determines the current work mode in real time, drivers' assignments/separations and trips in Wialon are determined by messages from the tracker recorded at a certain frequency, which is less than that of the tachograph.

The procedure of uploading files from the driver card to Wialon takes time, which is not always convenient. However, users may need real-time DWH information. To satisfy this demand, Wialon created an algorithm, the data source for which is selected on the Advanced tab:

The online data calculated from any of the sources is associated with the Driver element.

Online data can only be used as a rough estimate of the DWH compliance. Unlike the tachograph, which has an algorithm for recalculating previous intervals, Wialon saves online data without further recalculation.

There are several ways to display DWH information in Wialon.

The TachoView web application visualizes DWH information in the form of color charts and reports on driver activity or labor routine violations. 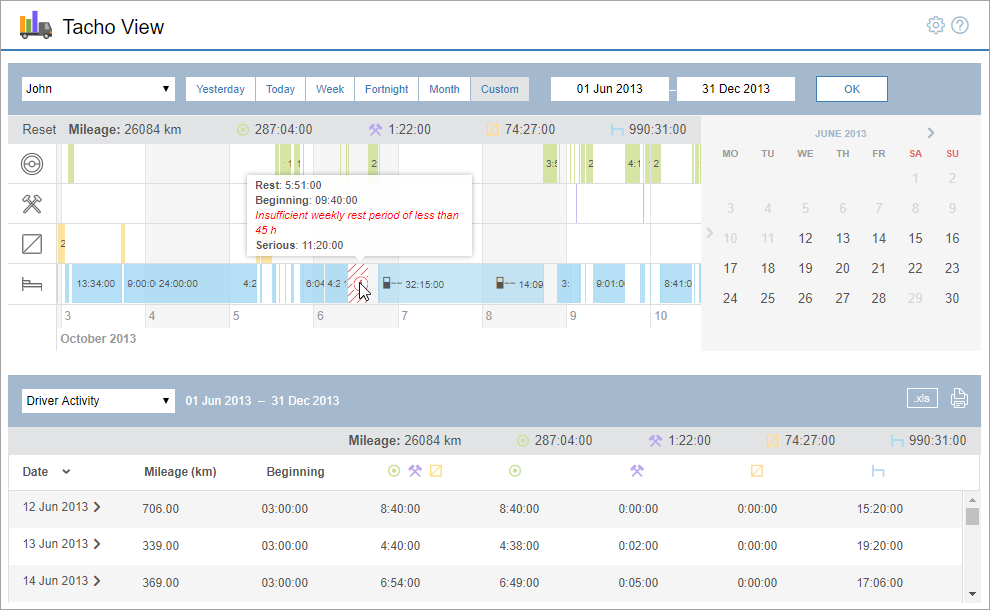 The information source for displaying is selected in the application settings, and it can be a file from the driver card or online data.

The Infringements table shows the information on the DWH violations.

In the settings of both tables, a file from the driver card, online data or assignments and trips can be selected as the source of information.

If assignments and trips are selected as the source, the result of the repeated report execution will change after changing the unit's trip detector settings or when editing the assignment history and registering driver shifts.

Additional information on the unit and the driver

To use this method, you should first enable the Driver activity by online data option in the general user settings.

When hovering over a driver, the information on DWH and violations will be displayed in a tooltip.

The same information will be displayed in the unit tooltip and extended unit information, if the display of drivers in the mentioned places is selected in the user settings and the driver is assigned to this unit.

The source of information for this way of displaying is always online data.