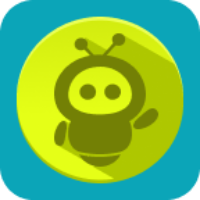 Fuel fillings and thefts can be detected only if a unit has fuel level sensors and has the Fuel level sensors option activated. Fuel consumption is calculated if there are fuel consumption sensors. The determination accuracy depends on the accuracy of the installed sensors as well as on their correct configuration. The parameters adjusted on this tab are used during the calculations. For your convenience, they are divided into several sections. 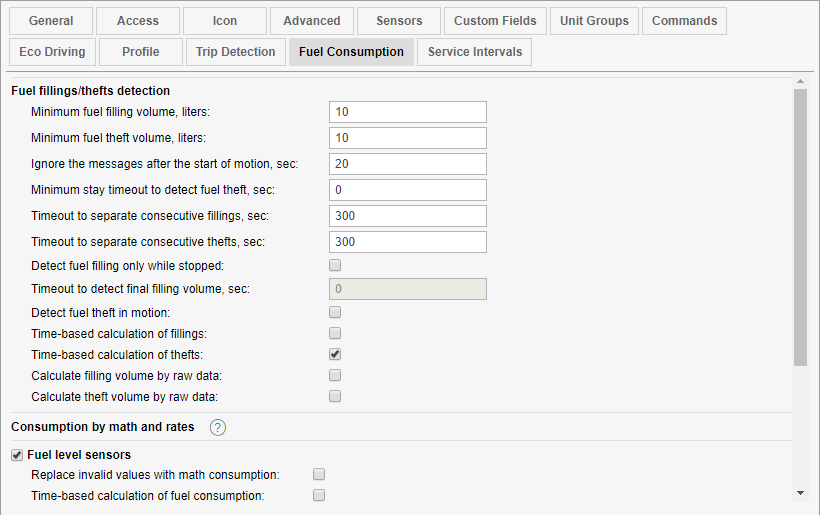 The minimum increase of the fuel level that should be considered a filling.

The minimum decrease of the fuel level that should be considered a theft.

The minimum duration of the interval with no movement, followed by a decrease in the fuel level in the tank for more than the minimum fuel theft volume indicated above.

The system can sometimes detect more than one fuel filling during a short time interval. In such cases, they can be combined in one if the time between them (timeout) does not exceed the time specified in the setting.

This feature is similar to the previous one. Thefts are not summed up if the timeout is exceeded and if the fuel level has increased between them.

When this option is activated, fuel fillings are detected only at stops, that is, when the speed of the unit is lower than the minimal speed indicated in the trip detection. This allows reducing the number of false fillings which may be caused, for example, by fuel level fluctuations during the movement.

If you type a certain value in the Timeout to detect final filling volume field, the system also detects fillings during this period after the end of the stop.

in the process of filling there can be interruptions. This option appears if the previous one is selected and allows to set the duration of such interruptions. In this case to determine the fuel level after refuelling, not the last message that corresponds to a filling is used, but the one that follows the indicated timeout.

Traditionally, fuel thefts are searched during the stops. This feature allows searching for them during the motion, too. For example, it may be useful for ships. However, in many cases, it may cause the detection of false fuel thefts due to probable fuel level differences while, for instance, moving on rough terrain.

It is recommended to use this calculation method for the units with high fuel consumption during the idling (generator, tower crane, etc.). When it is activated, the whole time period is taken into account regardless of trips/stops.

The feature is similar to the previous one, only applicable to fuel thefts.

With this feature activated, the initial and the final fuel levels on the interval corresponding to the fuel filling are replaced with the values from the messages before applying the filtration. This occurs only when the value from raw data exceeds the value obtained as a result of filtration.

With this feature activated, the initial and the final fuel levels on the interval corresponding to the fuel theft are replaced with the values from the messages before applying the filtration. This occurs only when the value from raw data exceeds the value obtained as a result of filtration.

The intervals are different for different report tables. You can learn more about the intervals from the description of the tables.

If the feature is activated, in case of erroneous values on an interval they are replaced by the values calculated mathematically. The mathematical calculation uses the data indicated in the properties of ignition, relative and absolute engine hours sensors (option Consumption, l/h) and the value of the engine efficiency sensor.

If the option is enabled, while calculating the fuel, all the time is taken into consideration, it does not matter whether the unit has been moving or not. If it is disabled, the fuel level during the intervals with no motion is not considered during the calculations.

Two types of impulse fuel consumption sensors are used in Wialon: simple accumulative and with overflow (on reaching a definite value, the impulses counter resets and the calculation restarts from zero). It is not practical to use the first type, while the sensors with overflow are widely spread.

Every sensor of this type must have a calculation table from impulses to litres (gallons).

Two options are available in this section:

If there is a limit after which the impulse counter is zeroed (overflow), it can be indicated in this field. However, with this limit adjusted in case of an emergency reset, the calculations will be meaningless.

The sensors of this type show the fuel consumption during all the period of vehicle operation. AbsFCS values increase all the time, so the overflow of such a sensor is not expected.

If this type of sensors is used, the hardware sends messages that contain the amount of the fuel consumed from the previous message till the current one. Accordingly, to determine the fuel consumption on an interval, the values of the InsFCS are summed.