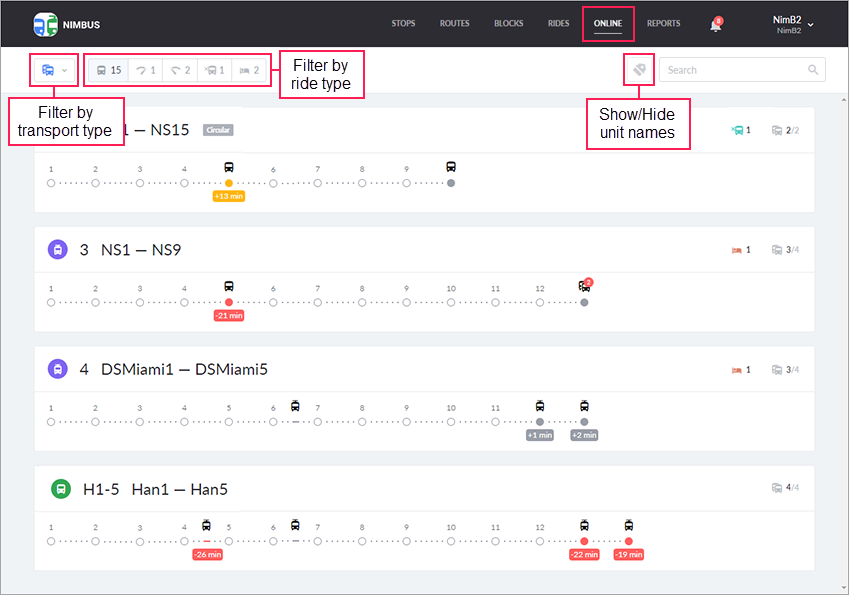 You can filter the routes by type of transport and rides.

Using the filter by ride type, you can view all routes at once or only those with rides of a certain type. To do this, click on the required icon in the filter.

The numbers next to the icons show how many rides of the given type are there on all routes.

The dynamic filter in the upper-right part of the page allows you to quickly find the required route by number, name, and description.

To the left of the dynamic filter, there is the Show/Hide unit names button (

). It is disabled by default. Click on this button to display unit names.

In the main monitoring interface, each route is represented schematically as a line with points (route stops). The units which are currently on the route are also displayed on the line at the stops or between them. This allows you to quickly assess the sufficiency of vehicles and the uniformity of their distribution along the route.

If the data relevance indicator and the time since the last message was received are green, the data is relevant. If they are grey, it is not. You can specify the time after which the data should be considered irrelevant in the user settings.

If the unit moves with a schedule violation, the time of the violation is shown below it and in the tooltip. The plus sign means hurry, the minus sign shows the delay from the schedule. If the violation is beyond the allowed limits, the following colors are used to draw attention to it: red for delay, yellow for hurry. The degree of permissible deviation is set in the user settings.

In case several units overlap in one place, they are displayed by a group icon, the tooltip to which contains a list of these units. 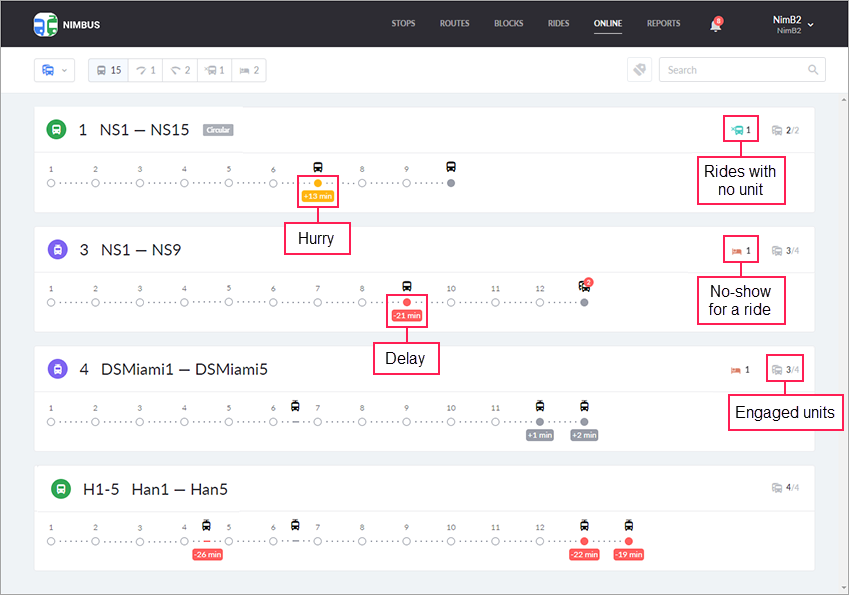 In the upper-right corner of the block with the route, there is an icon with the data on the actual and planned number of units on the rides (

). The tooltip of the icon contains the following information:

Units engaged. The percentage ratio of the actual number of units to the planned one.

Actual number. The current number of units on the route that have visited at least one stop (regardless of whether it is ahead or behind the schedule).

Planned number. The number of units assigned to the active rides of the route. It should be noted that not all the active rides are taken into account, but only those for which the start time has come, but the end time has not.

In case there are 'problematic' rides, the following icons are displayed in the upper-right corner of the block:

The numbers next to the icons show how many rides of the given type are there on the route.

Monitoring on the map

Clicking on the heading of the block with the route allows you to view it on the map, where the route is depicted with all stops and paths between them. In addition, in this mode, you can see the geographic location of units and the direction of their movement on the map. 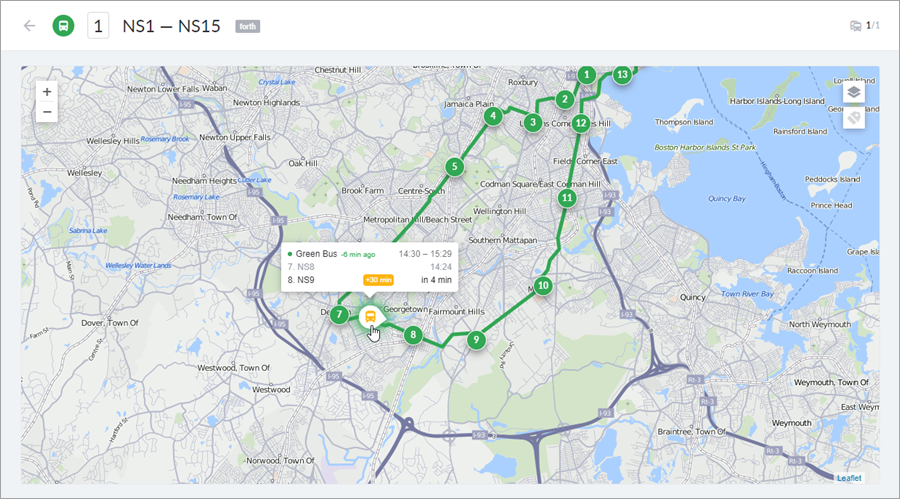 When you monitor on the map, it displays all the units that are on active rides of this route and have positional data, regardless of whether these units are on the route at the moment or not. On the diagram, the number of units can sometimes be less, as it displays only the units that visited the route stops.

The tooltips of units and stops show the detailed information about them.

The time of visiting ride points that go beyond 24 hours has a pale purple highlight in the background. If a critical hurry or delay is detected, the unit icon is colored yellow or red, respectively.

When you click on a stop, the map zooms in and the shape of the stop is displayed. Another click returns the original look of the stop.

Some methods of monitoring

Ride activation happens automatically 10 minutes before the ride begins on schedule regardless of whether it has assigned units or not. You can change the activation time in the According to schedule field in the depot settings. Activation means that the system begins to monitor (receive and analyze) messages from the unit assigned to the ride.

The Online 2.0 mode uses the new strategy of message processing according to which the system constantly monitors messages both from the units manually assigned on the Rides page and from the units associated with the route.

In Online 2.0, the When visiting a stop activation type is also available. The ride is activated when one of the units associated with the route visits the first stop on schedule. Thus, the associated unit that first visits the area of the first stop is automatically assigned to the ride.

The monitoring of the ride is carried out based on the data from the messages according to the following principles:

A stop is considered to be visited when a message is received from its zone. The first message in the stop zone also indicates if the schedule is followed.

The system expects the stops to be visited in chronological order. Therefore, if the fifth stop was visited after the third one, then the fourth stop is considered to be skipped (unless later there is a message from a black box about visiting this point in chronologically appropriate order).

Ride activation in the Online 2.0 mode

According to schedule and When visiting a stop are the two types of ride activation available in the Online 2.0 mode. The activation depends on the time indicated in both fields and the time when the unit visits the first stop of the route.

Below are the examples of the ride activation for the route with the automatic assignment of units. The following data is taken into account: