If no schedules have been created for the route, click on the Create first schedule button (

To create schedules, you should have the Create, edit, delete routes access right to the route. 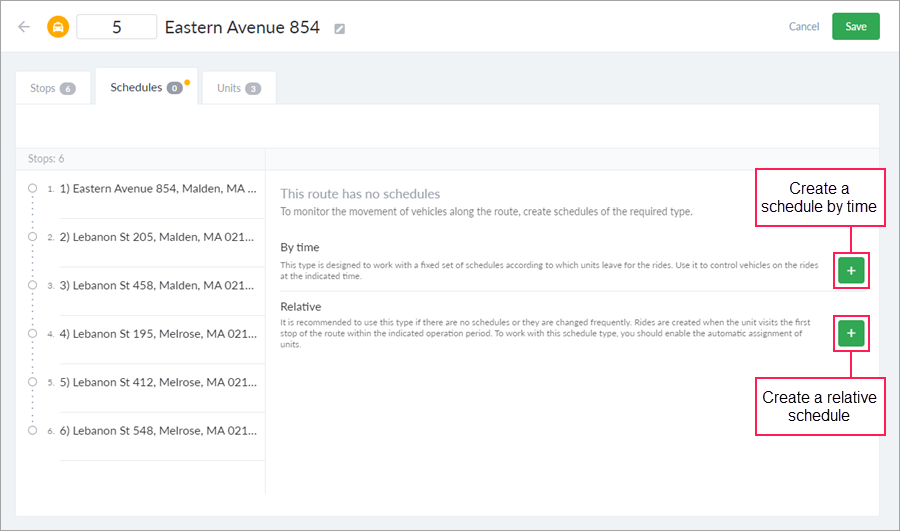 Two schedule types are available: by time and relative.

The first schedule is created automatically according to the following principles:

You can change the time of visiting stops by entering the necessary numerical value from the keyboard or use the up and down keys.

When creating or editing a schedule, you can specify an operation pattern and a unit for it.

In schedule properties, the pattern can only be specified. Creating and editing operation patterns is conducted in a separate interface.

Schedules can be filtered by their affiliation to a particular operation pattern. To do this, use the drop-down filter above the stops list.

The unit should be indicated only if it constantly goes on rides on this schedule. In this case, there is no need for the dispatcher to assign a unit manually each time because when the ride is activated, it is assigned automatically.

If schedules contain invalid data, the Save button for routes becomes inactive, the Schedules tab is marked with a red dot, and all the invalid cells are highlighted in red.

The system gives a schedule an opportunity to go beyond 24 hours. In other words, the route can physically begin on one day and end on the following. The time of the visit with the transition to the following day should be marked as running past midnight. For the first and last points, this is regulated by the button with a crescent moon (

). For the rest, you should select the Past midnight item in the menu under the elision marks. Visually, such cells have a pale purple highlight in the background.

The Past midnight function is available only for schedules by time because relative schedules cannot go beyond 24 hours.

Since often the schedules of one route differ from each other only by the start time, and the intervals between the stops remain unchanged, next schedules can be created based on the already existing ones. To do this, click on the Add schedule button. The system offers to create a copy of the existing schedule (if there are several, select the required one from the drop-down list) with a shift of 10 minutes. If necessary, edit the start time of the new schedule and click Apply. If you create two or more copies of a schedule sequentially using the same delta (shift) between them, this delta is suggested to determine the start time of the future schedules instead of 10 minutes by default. If the schedule should not be a copy of another, select the dash  Copy from in the drop-down list. Next schedules can be created in the same way without closing the window for adding them.

After you finish working with the schedule list, save the route.

As a result, the one-time schedule created on the basis of the relative one is displayed wherever the ride time is indicated (on the Rides page, in notifications, reports, etc.) Also, data on the ride events is formed according to this schedule (hurry, delay, no-show, and so on).

For a relative schedule, you should also specify an operation period not exceeding 24 hours. The operation period is a time period within which the rides of the route should be created and activated. 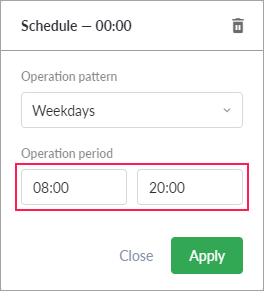 The time of finishing the ride can go beyond the specified operation period.

Relative schedules work only with the function of the automatic assignment of units. Rides are created and activated within the specified operation period as soon as one of the units associated with a route visits the first stop of the route (see the When visiting a stop ride activation type).