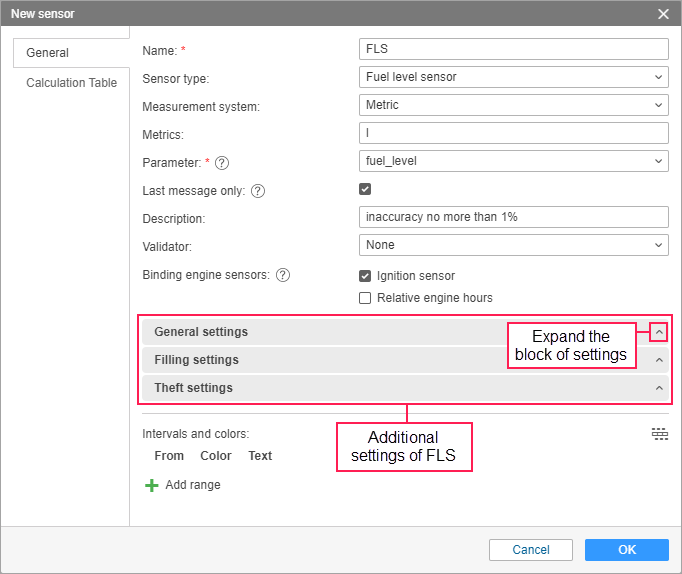 Ignore the messages after the start of motion, sec

This option allows detecting thefts and fillings. If it is enabled, the data calculated by fuel level sensors are included in the Consumed row in statistics.

This option becomes available when the Calculate fuel consumption by sensor option is activated. If this option is enabled, median filtering is applied to the received values of the sensor to exclude data emissions (sudden increases or decreases in the fuel level). The minimum filtering level is equal to 0 (zero), and smoothing is carried out on the basis of three messages. Then all the filtration levels from 1 to 255 are multiplied by 5 to determine the number of messages according to which the smoothing is carried out. Thus, the higher the filtration level, the closer the fuel chart to a straight line, so it is not recommended to use a filtration level higher than 8 (level from 0 to 3 is optimal).

If this option is enabled, the smoothing algorithm is applied to the sensor values. In the field, you should indicate a smoothing level (from 0 to 255) after activating the Filter fuel level sensors values option.

The filtration level is taken into account in reports (in tables and charts while drawing smoothed lines), in jobs on sending fuel level information and in notifications about fuel fillings and thefts.

If any value is indicated in the Timeout to detect final filling volume, sec field, the fillings are also detected during this time after the stop ends.

This option becomes available when the previous one is activated. The option allows indicating the duration of interruptions between fuel entries in the process of filling. To determine the fuel level after filling, the message that follows the indicated timeout is used, but not the last one that corresponds to the filling. To determine the filling volume, the difference between the fuel level is calculated from this message, and the one that precedes the start of the filling.

When this option is enabled, the initial and final fuel levels at the filling interval are replaced with the values from the messages sent before applying the filtration. The replacement takes place only when the value from the raw data exceeds the value obtained as a result of the filtration.

It is similar to the Time-based calculation of fillings option (see above).