To open the wizard, click on the corresponding button in the upper right corner of the Sensors tab of the unit properties.

While opening the math consumption wizard, the system searches for existing engine operation sensors (ignition, relative and absolute operating hours) and engine efficiency sensors, and also checks the values of the previous settings.

The window of the wizard consists of two sections and looks as follows: 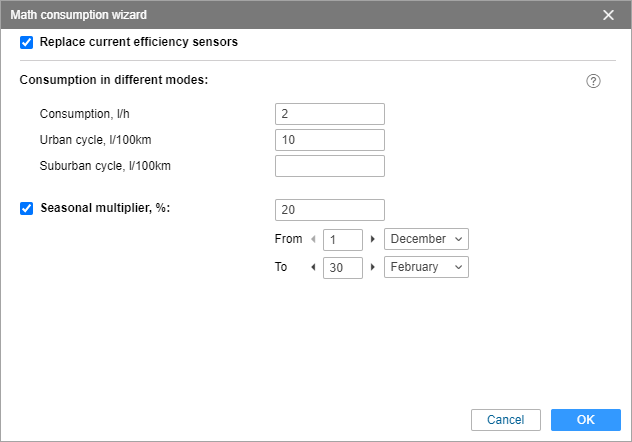 In the first section, two options may be available for activation according to the previous properties of the unit.

It is shown if engine efficiency sensors have been found. The checkbox of this option is activated by default. When you press OK, the sensors created before are replaced by the new ones. If the checkbox is not activated, the new sensors are added to the existing ones.

It is shown if the unit has previously activated fuel calculation checkboxes. If the option is enabled, the two sections of the wizard located below become inactive and are filled with the available data.

In the second section you can specify the consumption in different modes and the seasonal multiplier.

After pressing the OK button, the ignition sensor is created (or the consumption during idling for the existing sensors is modified), as well as the engine efficiency sensor with the parameter (speed + #speed)/const2. The data for the consumption in urban and suburban cycles and the minimum moving speed from the trip detector is used for the calculation table.

If the values for the seasonal multiplier are indicated, after pressing the OK button the engine efficiency sensor with the parameter time: d is created.

All the sensors created by means of the math consumption wizard have the mark (wizard) in their names.