Wialon works with different measurement systems: metric, U.S., imperial, and metric with gallons. The corresponding feature can be set for units, resources, and users during their creation. The system of measures for routes is also set when it is created and is determined by the user's settings.

The table below provides you with the units of measurement (and their abbreviations) for the systems used:

American and imperial systems, in fact, use the same units of measurement. The major difference is observed in calculating the volume of fuel. Below is a conversion from one system of measures to another:

The system of measurement for the elements which already exist can be changed with the help of conversion. Only the top-level user can use Conversion. It is available in the interface of the management system. To bring up the conversion dialog, it is necessary to select the corresponding item in the user menu. 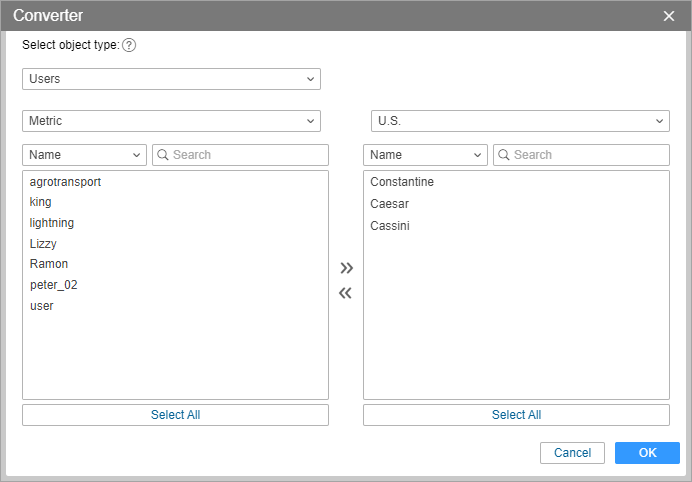 Below the object type, select initial and target measurement systems for conversion. For example, if you choose Metric => U.S., a list of elements currently using the metric system is formed below.

From the list, select the objects which should be converted. To add these objects for conversion, use double-click or select an object and press the corresponding button (the arrow pointing right) between the lists. The added objects form the list on the right. To remove items from this list, either double-click them or select and press the corresponding button (the arrow pointing left). To select multiple items, hold the Ctrl key and click on the required items. To perform the conversion of the added items, click OK and confirm your actions in the appeared window. The success of the procedure is reflected in the log.

Ideally, users have the same measurement system as resources and units used by them. In this case, everything that the user sees during online tracking in different panels and dialogs and also everything that is received by email using jobs and notifications has the same system of measures.

If the conversion is performed over units, the units' parameters such as a trip detector, fuel consumption settings, counters, eco driving criteria, etc. are recalculated. This affects the representation of units in the tracking system. Changes affect not only unit properties but also the display of messages, tracks, tooltips, etc.

The conversion does not affect the sensors of the unit. If it is necessary, their measurement system can be changed manually in the corresponding drop-down menu.

When converting resources, some contents of these resources, particularly, circle-shaped geofences, different settings of jobs and notifications, etc. are recalculated to other measurement systems.

When converting users, the measurement system for the selected users is changed. It affects different online calculations, particularly the work of such tools as Distance, Area, Routing, Nearest units. Address defining parameters are recalculated as well.

Besides, the system of measures indicated for the user is selected automatically when they create report templates, units, other users, resources (regardless of who is chosen as the creator or in which resource the object is created). At the same time, during the creation of these objects, the system of measures can be changed manually. It does not affect such objects as geofences, jobs, and notifications because their measurement system is taken from the resource they belong to.

When converting routes, a new system of measures is applied to the calculation of the radius of control points.