As with the tables, there are several types of charts:

The charts of this type differ in that the X-axis always lays time, and the data for the Y-axis is selected on the Data tab from the list: 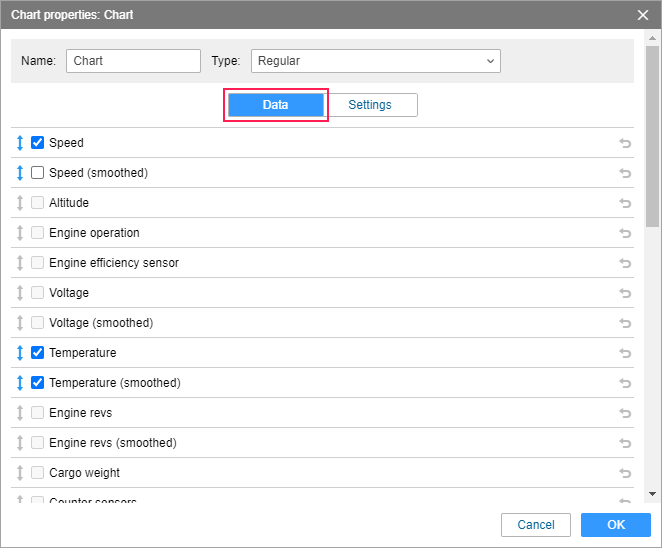 The picture below shows the speed chart combined with the fuel level chart. To receive such a chart, it is required to set the chart type as Regular and select the Speed and Fuel level data.

Each curve on a chart is assigned its own color. On the left, in the Report result block, you can specify which color corresponds to which curve. Their names are taken from the report template. In addition to the name for the curves, the units of measurement are also indicated.

The names of the lines of the chart can be changed in its properties in the report template. However, if the curve is built based on some sensor, then it is given the name of the sensor.

Click on the curve name in the Report result section to enable/disable its display on the chart.

Almost all charts of the Regular type are provided in two forms: raw and smoothed (smoothed is indicated in parentheses after the name). Smoothing affects the style of the chart display. The chart without smoothing is built straight from a message to message, and, as a result, has an angular outline. If you choose smoothing, the chart has a smoother outline. The level and algorithm of smoothing for all charts are the same.

Below is an example of a chart in which a raw speed chart is displayed with an orange line, and a blue one shows a smoothed chart.

The Instant mileage chart represents the data in the mileage from the previous message to the current one form, that is the difference in the distance between two adjacent messages. This kind of chart can be useful to detect excessive mileage during connection loss, or to detect made-up additions to the mileage in cases where it is determined by special sensors (see the settings of the mileage counter in the unit properties). Instant mileage can be smoothed.

Along with the regular charts, the following charts are available:

Settings for these charts are fixed and cannot be changed. Editing is available only for the name of the chart. Also, it is possible to select the required sensors (indicate the mask of the sensor) or split sensors.

The Processed fuel level chart shows the values which are used while calculating fuel level, fillings and thefts in tables.

The chart shows the dependence of fuel level on mileage (mileage/liters). It can also show the dependence of the fuel level on time (time/liters) if the Time-based calculation of fuel consumption option is turned on in the unit settings. In both cases, the chart is processed taking the filtration into account, which is set in the sensor properties.

Below are two fuel level charts: the first one is processed (time-based FLS and filtration are on, the filtration level is 25), and the second one is not processed.

The regular Fuel level chart displays data based on the temperature coefficient without filtration. The Time-based fuel level sensors consumption option does not affect the chart.

The regular Processed fuel level chart displays the dependence of filtered and smoothed on the basis of mileage data from the time.

These regular charts can represent data only in the Time/Fuel level form. At the same time, it is possible to overlay other charts, such as, for instance, the voltage chart.

This chart shows the dependence of average fuel consumption on speed. The data for it is taken from fuel consumption sensors of different types (such as impulse, absolute, instant) or fuel level sensor, or predefined consumption by math or rates. The calculation methods must be specified in the properties of the required sensors. 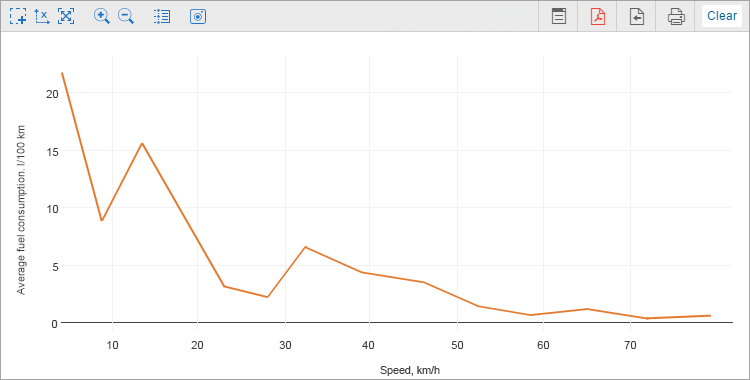